This year was supposed to set records for used car sales, but amid the pandemic, we’ve seen a historic collapse in vehicle sales. April 2020 saw an estimated 40 percent sales drop compared to April 2019. That said, April looks to be the rock bottom as numbers increased in May. Online and in-person traffic is on the rise as states have allowed dealerships to re-open for regular business, albeit utilizing social-distancing measures.

It’s expected that many people who needed a vehicle were waiting for the pandemic to begin subsiding before more safely venturing out to make a purchase. Perhaps we’ll see the May trend continue, and used sales will continue to increase during the next few months.

People are getting back to work. Over the past 8 weeks, 36.5 million unemployment claims have been filed, but that has fallen to 22.8 million by mid-May. The need for vehicles hasn’t gone away, and consumer confidence is slowly returning as the virus has peaked and as furloughed and laid-off folks begin returning to work.

Wholesale auction sales increased through May as dealers ramped up inventory in preparation for re-opening, a good sign of the business to come. We’re also seeing an increase in wholesale used vehicle valuations, up 5.7 percent the first two weeks of May compared to the first two weeks of April, and they’re selling above current MMR values.

Used retail vehicle sales are also on the upswing. May 7-14, used car sales were only down 6 percent year-over-year. CarGurus shows only a slight decrease in used car pricing over the past 6 months, which is to be expected, but the hope is that the price decrease will be made up with volume increases. 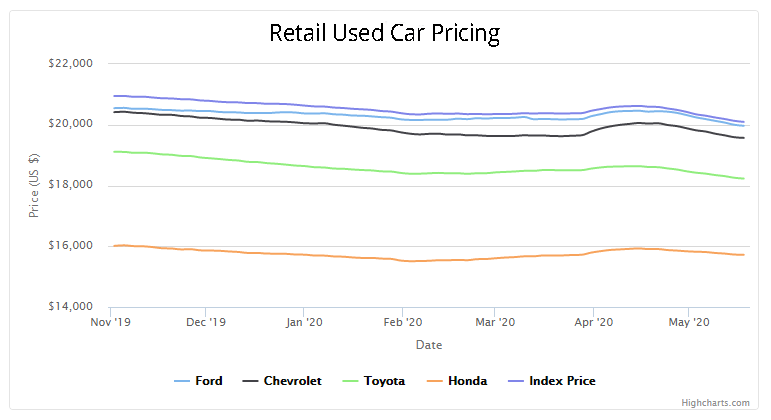 There are also additional concerns surrounding the Hertz bankruptcy. Hertz entered 2020 like most companies, reasonably strong, but now the tremendous slow-down in business and leisure travel has caught up with them. Revenues are way down as a result of travel bans, closed theme parks and cancelled vacations. With Hertz’s bankruptcy, many wonder how it will affect the rest of the used car market. What will happen to used car pricing as a result?

Despite all of this, Technavio shows hope for the future over the next four years. Based on used car trends, it expects to see year-over-year global growth. Most importantly, dealers will need to shift more sales online to share in this growth, especially as consumers have become more accustomed to virtual buying during the pandemic lockdowns.

Ultimately, while we’ve seen a downturn throughout the last few months, things are moving in the right direction. People are starting to buy. Sales are increasing and retail pricing is improving. The future of the used car market is cautiously optimistic.

If you’re interested in hearing more about the future of used car sales and the impacts on your dealership, Bel Air is hosting a panel discussion with industry experts Ed Robinson and Hal Logan on June 30 at 2 p.m. ET.