The performance of the stock market reinforces Bel Air’s belief in the strength of the franchise dealer model. The market, however, does not fully appreciate dealers as it searches for “disrupters.” The market most highly values online used vehicle retailers. The fact that they are not profitable seems to be beside the point. The fact that franchised dealers also sell used vehicles also appears to be beside the point. This increased focus on used cars and private dealers’ ability to highlight this value could lead to higher overall valuations when a sale is being contemplated.

Blue-Sky values for the publicly held franchised dealers have rocketed upward since Covid-19 depressed share prices in March. Lithia, which announced the expected opening of an on-line used vehicle platform by the end of this year and an expected increase in earnings per share of 34% annually over the next five years, is the most highly valued. Sonic, which is also aggressively pursuing a used car strategy, is second.

As the next chart shows the $20 billion overall value of the public companies has also risen to levels higher than they were at the start of this year. The pie chart following shows that Lithia is now the most highly valued franchised dealership group. 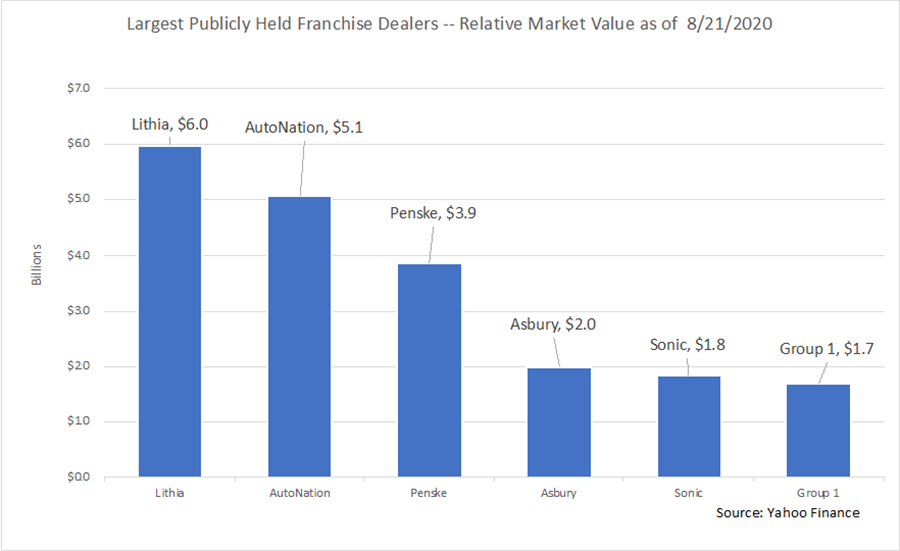 The market’s focus on used vehicles is highlighted in its pricing of CarMax shares. In 2019, the combined profits of the franchised auto retailers were $1.7 billion as compared to less than $900 million for CarMax. In spite of this, the current value of CarMax at $17.4 billion almost equals the combined value of the six largest franchised public retailers (see following chart).

The market’s obsession with disruptors is highlighted in that Carvana, the used car digital dealer valued at $34.5 billion, has a value that approaches the total value of the publicly held franchised dealers and in the value of CarMax, despite the fact the Carvana has never been profitable. The recently public Vroom, another disrupter, has a value of $7.4 billion and also operates as loss. Together, these two disruptors exceed the value of their more traditional competitors.

Since all franchised car dealers have computers and sell used cars over the internet, what would be the value of their used car business on a stand-alone basis? Are Carvana and Vroom’s advanced online experience so unique that current competitors in the marketplace cannot replicate it?

Value may be in the eye of the beholder, but the market appears to have gone to extremes with used vehicle disruptors. However, this increased focus on used cars can boost the valuation of new car dealers who are attuned to the digital used car marketplace.