The Future of Car Dealerships

Bel Air is assisting several established, well capitalized car dealers seeking new investments in car dealerships. In certain instances, if an outright sale is not in the cards, capital may be available for a minority position. Why?

The current Covid-19 pandemic is casting a cloud of despair over the country. Unemployment is soaring. Consumer confidence is deteriorating. Many are tormented by financial worries and the uncertainty about when “normal” will return.

Even when the initial crisis abates, consumers will have been through a life changing event akin to the Great Depression. Unnecessary purchases will be deferred until the pandemic has been minimized, and financial stability has returned. They will be hesitant to take on substantial new debt. Forget about new automobiles.

Dealership attrition is inevitable. In many cases a strong balance sheet may be the deciding factor. 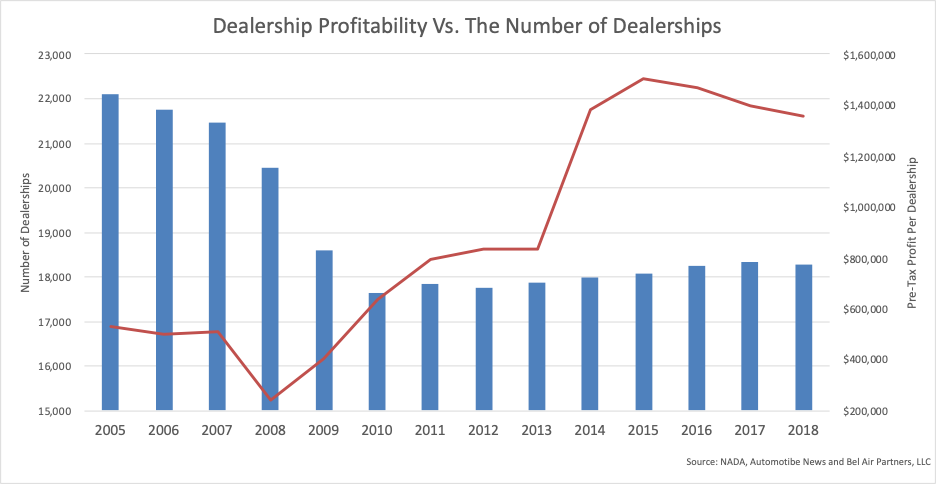 History is Our Reference

Despite this depressing assessment, Bel Air and our investors believe in the viability of auto retailing. This industry has faced challenges before only to exceed past performance. Resilient, well-capitalized dealers will survive and gain from the ultimate denouement of their less fortunate competitors.

The financial crisis of 2008 - 2010 represents a useful comparison to today’s economic upheaval. The auto business was already on a downswing with the SAAR contracting from 16 million units in 2007 to a low of 10.4 million units during the period. Profitability fell dramatically, to a low of $244,000 per dealership in 2008.

As business shrunk numerous undercapitalized dealerships failed. Only to be exacerbated by the bankruptcies of Chrysler and General Motors who terminated numerous of their dealerships. By 2011 the recession began to ebb but nearly 4,000 dealerships disappeared, leaving 17,850 survivors.

As the economy steadily improved, the automotive industry began to rebound. By 2011 the SAAR recovered to 12.7 million units, but still not fully recovering to 2007 levels. Nevertheless, with 19% fewer competitors and a rising tide, the surviving dealerships prospered as never before. Profitability achieved a record for the time of $790,000 per dealership in 2011.

It didn’t stop there. Over the ensuing years, the dealership count has risen modestly by an average of 60 dealerships per year. But as the recovery evolved into prosperity, per dealership profitability continued an upward trajectory, reaching a record $1,500,000 in 2015. 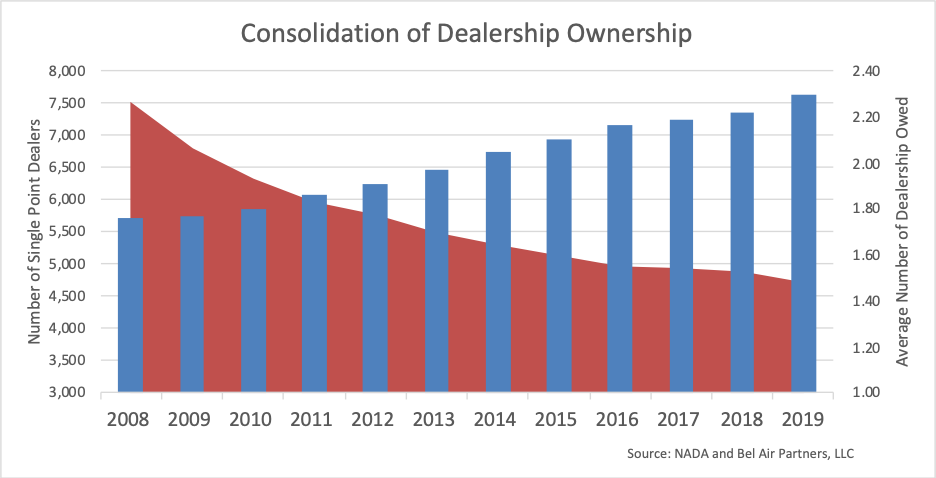 As dealerships grew more profitable, many surviving dealers invested their excess capital, acquiring smaller dealerships, and grew to larger and larger chains. Traditionally, dealers prefer to invest in what they know and can control. Not so much the stock market or other financial instruments under the control of others.

Consolidation might also be a contributor to improved dealership profitability. Larger groups enjoy certain economies of scale such as consolidating back office functions and investing in new marketing and customer service technologies.

NADA’s dealership census reflects this inexorable trend. The number of single points and small chains of six dealerships or less all declined from 2008 to 2019. The largest drop was single point dealerships, declining from 7,514 down to 4,972 or 34%. The average number of dealerships grew from 1.5 to 2.3 per owner. Dealership groups with between 11 and 25 grew the most, going from 79 in 2008 to 117 or almost 50%.

So Why? The Answer

Our investors believe history will repeat itself. Regional platforms will accelerate their growth as some single point dealers and smaller groups fail or decide the business is no longer “fun” and look for buyers. Fewer dealerships will once again translate into more business for those survivors.

Access to capital will be the difference between winners and losers. Our investors are eager to assist good but under-capitalized dealers overcome the vicissitudes of today and share in tomorrow’s recovery. They will put their capital to work assisting other worthy dealers who have been caught by circumstances beyond their control. Similarly, for those wishing to leave the business, they are available there as well.